From beekeeping to winemaking, native islanders and guests armed with different agricultural expertise are establishing a food enthusiast haven at Tinos on the Cyclades. And they won’t stop there! They’re transforming ancient structures into chic dwellings for guests and visitors, as well. Now it’s clear why the twentieth-century philosopher from Greece, Cornelius Castoriadis, referred to Tinos as the “handmade island”.

In the entire collection of 50 eccentric villages across 75 square miles of the island in the north region of Cyclades, marble sculptors have refashioned all lintels, doorways, and fountains into beautiful art pieces. Even the “For Sale” signposts sitting on vacated houses are made out of marble. 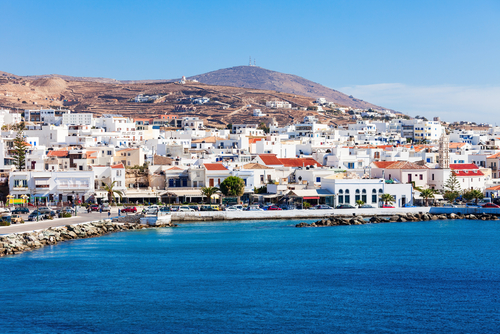 In 1842, a famous voyager and writer from France, Alexis de Valon, remarked: “The whole island is cultivated with great determination, almost in defiance of nature; in the absence of soil, the inhabitants were forced to plow through the rocks.” On his Volacus vineyard in Falatados, at the south-east portion of Tinos, Michalis Kontizas is maintaining such customary practice: Kontizas organic winery nestles amid granite rocks that are comparable to cannonballs in smoothness.

The barren countryside is the latest wine frontier of Greece. Tinos was a main area for wine production for hundreds of years. However, the time farmers moved to livestock during the 70s, the vines became wasted by foraging goats. “Greece needs tourism, as we don’t produce much. But we want those who come to try the things we do produce,” says Kontizas, pouring a couple of glasses of white malagouzia that palates, strongly, of summertime in the Cyclades. Above a block of granite, he places cuts of light pink louza (dried pork meat and treated in red wine). 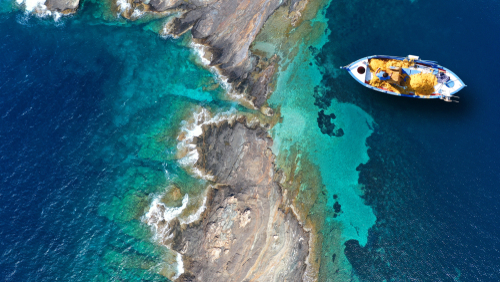 Just near the place, Jerome Binda, formerly from Paris, France, has created Domaine de Kalathas, where he tests and tries out different natural wines – with remarkable outcomes. The natural plantation is relatively inaccessible, powered by solar power and and resident’s well for water. While indulging in rabbit stifado, tomato fritters, and pickled artichokes at the grocery plus tavern of Tareza in the neighboring village of Myrsini, Binda shares the way in which she departed a career in graphic designing and antique dealing to stay on Tinos: “I was always a wine lover, but never dared to imagine being a winemaker. I thought it was reserved for people who inherited a vineyard, with their own techniques and clientele. On Tinos, I could create my own heritage with 150-year-old, ungrafted vines that had been left to their own devices for decades.”

Tereza jabs her head around the door. “Even if I burn the food, I just had to tell you this is the most delicious wine I’ve ever tasted,” she smiles, raising a glass of Binda’s gorgeously stabilized rosé. Similar to numerous family-owned and operated tavernas in rustic Tinos, basically, all dishes present in the menu, including the simple wine, is developed, cultivated, foraged or prepared by Tereza and her husband Joseph.

However, there are numerous restaurants which provide Domaine de Kalathas and Volacus wines. Restaurants such as San to Alati, Marathia, and Itan Ena Mikro Karavi, are all present within or close to Tinos Town, and any and all ingredients they utilize are from Greece with fresh inspirations and innovations. Such restaurants and other native food establishments have grouped together to form Tinos Food Paths, a yearly spring festivity to commemorate the culinary legacy of the island.

Various sorts of businesses have welcomed the culinary resurgence of the island. Eleni Toli, formerly from Athens, left a career in a private corporation to establish a yoga shala in a house built in an island during 1797 and provides select herbal teas following class. Beekeeper Nikos Karagiorgis offers gorgeous heather honey in his store situated at Pyrgos, in the northern part of the island, beside a raki, produced by his son Dimitris, that he asserts is so pure it is immune to hangover.

In Crossroads Inn, at Tripotamos village on the center of the island, even the chamomile and lavender soaps are made by the inhabitants by hand. A lot of the village’s 40 something local dwellers supply ingredients required to prepare a Cycladic breakfast – a banquet of eggs, preserves, pickles, pies, goat’s cheese, and fennel salami.

Within a small community, a kilometer or two away, visitors of Xinara House have the freedom to choose persimmons, peaches, and figs for breakfast, alongside eggs, milk, and yogurt produced by local farmers. A couple from the UK, Peter and Sue Marston, an architect and an artist, are renovating this 1800s home of a bishop and smithy with the aid of the creative marble experts living in the island. The plantation features its personal vineyard and a plunge pool enclosed by huge rocks that are provided for by a spring in the nearby mountain. Local chefs will cook traditional dishes in the kitchen, which is littered with the Marstons’ magpie assemblage of art and antiques.

However, the true spirit of Tinos is optimally enjoyed at Thalassaki, at the breakwater in Ormos Isternia on the northwestern region. The exceptional dishes from Antonia Zarpa – squid ink tarama, goat’s cheese with bee pollen, and octopus with chickpeas, roast onions and lemon jam – boasts a strong cult following that motorboats daily, zipping to and from bustling Mykonos, to the south.

Hums of pleasure interrupt the tranquil late afternoon, up until a massive wave arrives without notice, carrying with it an assortment of mussels, flip flops, and a mobile phone. “This never happens,” the waiter nods. Tinos may be the new gourmet haven in Greece, but it remains, delectably, under the mercy of Mother Nature.