A Polar Vortex was unleashed on several parts of the U.S. in 2019. This weather phenomenon hit a particular apple orchard in Michigan quite hard. While farm manager Andrew Sietsema was pruning to repair the damage caused by the vortex, he found something surprisingly elegant.

Sietsema came upon a phenomenon he named ‘ghost apples’. As the name implies, these spectral-looking, fruit-like objects resemble something made at a glass studio. Due to the acidity of the apples, the fruits began to thaw quicker than the ice as the temperatures began to warm once more. Sietsema shook the trees as he pruned and the shaking caused some of the fruit to completely fall from the tree. In some cases, only the mushy remains of the apple fell to the ground while the radiant, crystalline apple-like objects remained on the trees. 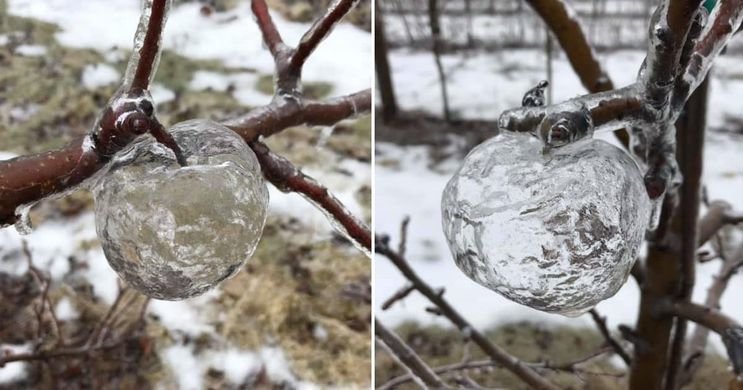 Many of the netizens were unable to ignore the sight of the frozen apple shells. According to experts, however, this phenomenon can only occur under specific conditions and is highly unlikely to reoccur in the future. The public should take the opportunity to gander at the icy apple shells while it lasts.

The orchard Sietsema worked on was not the only farm to contain ghost apples. In fact, many of the state’s orchards with unharvested apples also had them, though other fruits did not yield the same results as the apples. This is due to the fact that apples have a very low freezing point compared to other fruits, and likewise have a lower melting point due to their acidity. In Michigan, fluctuating temperatures are a recurring weather event, with arctic temperatures quickly being followed by warmer ones. This brisk change in temperature was ideal for the occurrence of these ‘ghost apples’.