Forty-five minutes after the sun started rising over the Mojave Desert, Stratolaunch, the biggest airplane ever built, took off for its first test flight. The aircraft, with its record-busting 385-foot wingspan, is owned by Stratolaunch Systems Corporation (Seattle, WA) and took 8 years to get to where it is now. The company is hoping to use the twin-fuselage, catamaran-style aircraft to launch rockets into space by 2022.

During a press call, Stratolaunch CEO Jean Floyd told reporters, “All of you have been very patient and very tolerant over the years waiting for us to get this big bird off the ground, and we finally did it.” During the 150-minute test flight, the company revealed that the plane reaches a speed of 189 mph and altitudes of 17,000 feet. It later landed safely at the Mojave Air and Space Port.

However, the day’s cheerful events were tinged with bittersweet edges. Paul Allen, Microsoft co-founder and long-time space aficionado who founded and financed the Stratolaunch project, died in October 2018 due to complications stemming from non-Hodgkin’s lymphoma. 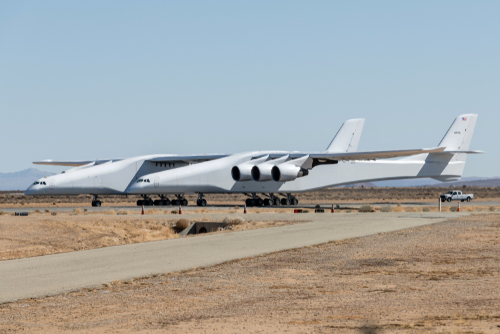 Stratolaunch Systems is hoping that one day soon, its carrier aircraft will be able to carry 250-ton rocket ships loaded with satellites to a height of 35,000 feet—right into the stratosphere. As soon as the plane has reached cruising altitude, the rocket’s engines are designed to ignite, carrying the rocket and its satellite cargo the rest of the way until they reach space. For now, only a few facilities, such as the Kennedy Space Center in Canaveral, FL, can handle rocket launches, which can lead to tight competition for scheduling and lengthy wait times. Meanwhile, there are many runways from which large airplanes can take off — a situation that Stratolaunch Systems hopes would give its carrier aircraft a competitive edge for those who want to send satellites into orbit.

Stratolaunch’s 28-wheel landing gear and six Pratt & Whitney PW4056 engines were originally designed for Boeing 747 planes. In fact, Scaled Composites, which collaborated with Stratolaunch Systems to construct the aircraft, repurposed many aircraft systems and parts from three 747s to put the new plane together, resulting in reduced development costs. The carrier aircraft fills almost every corner of its specially constructed 100,000-square-foot hangar. The plane has a maximum takeoff weight of 1.3 million pounds. (It should be noted that, while Stratolaunch is certainly the world’s largest plane, other planes are actually longer.)

The company’s aims have evolved throughout the years. The plane was originally meant to transport modified SpaceX Falcon 9 rockets into space, but the two partners soon went their separate ways. In 2016, Stratolaunch Systems formed a new partnership with Orbital ATK (a Northrop Grumman subsidiary), which manufactures the Pegasus XL rocket. Stratolaunch Systems had once planned to make its own rocket ship and rocket engines, but it eventually scrapped the project and laid off some workers in early 2019.

While representatives from Allen’s holding company have stated that the late billionaire had earmarked funding for Stratolaunch before he died, the future of this venture is not wholly clear. A company spokesman made no definite statement as to whether the company is planning to make additional flights, and the aircraft will still have to be certified by the Federal Aviation Administration before it can actually start carrying satellites and rockets into space.

The project is also facing outside pressure. Virgin Orbit, owned by Richard Branson, is also planning to conduct testing of a modified Boeing 747 later this year — a plane that’s designed to essentially do the same thing.

Another factor that is also weighing in the back many people’s minds is the specter of the Spruce Goose. That plane (officially named Hughes H-4 Hercules), considered a marvel when it was completed in 1947 as a pet project of business tycoon Howard Hughes, only made a single 1-mile flight before it was summarily retired in a museum in Oregon (Allen was reported to have visited the museum to check the plane).

On Saturday morning, however, the Stratolaunch team looked upbeat after watching the results of their efforts. Floyd noted that “Even though he wasn’t there today, as the plane lifted gracefully from the runway I did whisper a ‘thank you’ to Paul for allowing me to be a part of this remarkable achievement.”