A Student-Built Car Drives 2,713 Miles on One Gallon of Gas!

An annual gathering takes place called the Shell Eco-marathon Americas event, where engineers compete by creating the best-designed-fuel-efficient car. A team from Universite Laval in Quebec, Canada, garnered the coveted grand prize this year for the category of vehicles equipped with internal combustion engines. They built a vehicle that can keep going for 2,713.1 miles (4,366 kilometers) on just one gallon (3.8 liters) of gas. For distance perspective, that’s like traveling by car from Atlanta, Georgia, to Seattle, Washington.

Universite Laval has a reputation for coming up with innovative prototype vehicles with incredible fuel efficiency. For instance, in 2016 students from the school entered a car in another mega-efficiency competition, hosted by the Society of Automotive Engineers. The vehicle was recorded to have an astounding fuel efficiency rating of 3,788 miles (6,096 kilometers) per gallon.

Compare these figures with the top fuel-efficient vehicles today as recognized by the United States Department of Energy. On record, the most efficient vehicle to date is the Hyundai Ioniq Electric. Although not a gasoline-powered car, the Department of Energy equates its efficiency to a car that registers 136 miles (219 kilometers) per gallon. Nothing to scoff at here, but the prototypes from Universite Laval are literally miles away. 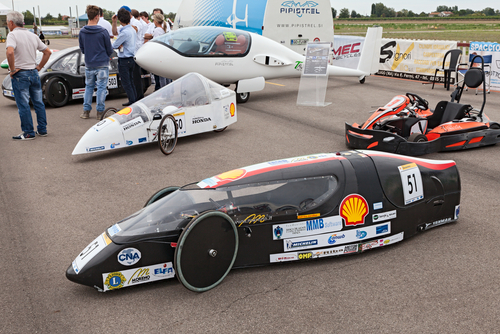 Vehicles considered, super-mileage, are capable of squeezing out all the energy from gasoline using many protocols. A modern, high-performance powerplant is the obvious source, but certainly not the only one. A strategy is to also strip to the bare essentials, but not at the expense of safety. Aerodynamics is also crucial, with the least drag as the goal. Lastת but not least, driving technique comes into play to maximize all these design efforts.

Universite Laval’s Alerion Supermileage is a single-seater car with most of its data kept under wraps for competition reasons. What we do know is an earlier version was retrofitted with a single-cylinder, 3.5-horsepower engine by Briggs & Stratton. That is similar to a lawnmower engine, but the team claims they made modifications, which they refuse to divulge.

Carbon fiber is the material of choice for the body due to its lightweight but strong characteristics. Visually the vehicle has a proportionately small front area to minimize wind resistance. In 2011, the prototype had a frontal area that measured 0.285 square meters (3.068 square feet). Comparatively, that is a fraction of what is typically seen in production vehicle designs.

Terrific as these cars are on gas mileage, we won’t be seeing these prototypes in any local dealerships in the foreseeable future. These prototypes, realistically, are still miles away (pardon the pun) from any mass production line. What they do serve to improve is how car technology will eventually evolve.