The Genesis Mint Concept: The Future of Electric City Driving

The Genesis Mint concept envisions releasing a two-door city car powered by electricity. The brand is pushing for its release in the foreseeable future soon. It’ll have a cargo space that’s accessible via two reverse-opening scissor doors located on the sides of the car. The vehicle’s interior will feature minimal instrumentation and a bench seat.

Genesis claims that it is now time to break the mold towards luxury cars. They are already doing it upon its debut at an auto show in New York. The name Mint comes from the model’s bright Hunter Green paint in matte. The two-door and two-seat, electric city car might need a little time getting used to, but all its features are well thought-off. 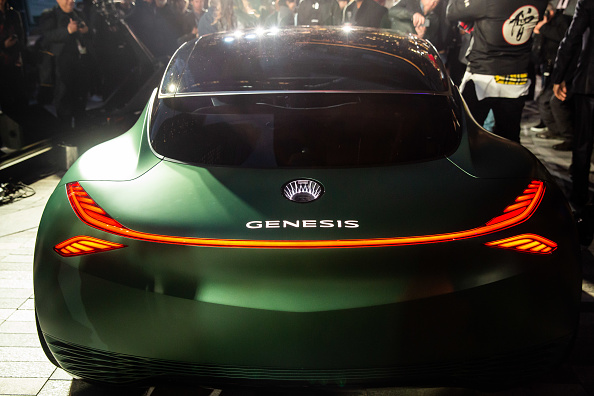 Ahead of the Mint’s unveiling at its preview event in NYC, Genesis executive vice president, Manfred Fitzgerald together with Hyundai’s global head design, SangYup Lee allowed our team to get up close with the concept car and learned more about the concept.

Fitzgerald told us that Mint model is made to fill in the gaps in the luxurious city car OEMs. He continues that they purposefully created the vehicle to not fall under any model hierarchy that’s typically found in the automobile industry. In this industry, size does matter for luxury cars, but Genesis wants to think outside the box. Lee adds that they want every car to have their character where luxury is mostly linked to bigger cars.

The whole concept of Mint is about giving small cars a chance to be seen luxurious, and Genesis is expecting great feedback from the public. The model is the brainchild of the company’s German, Korean and American design studios. Lee continues that while the car has a coupe-like, sport stance and full body, it is created as a design statement rather than a performance car. A statement like what the original Audi TT gave to the masses. 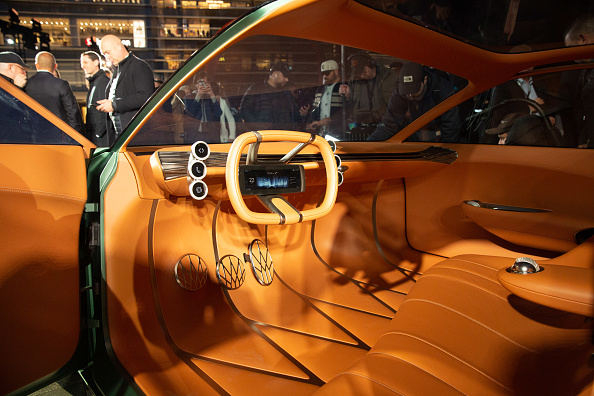 The brand’s signature quad headlight is finally getting a revamp with a winglike design and a top set that’s connected by a light strip. However, the taillight design appears to remain the same. The Genesis crest grille is replaced by a tiny V-shaped opening located where a larger crease that seems to be an echo of the grille’s shape. The roofline’s radical design is complete with a kicked-up C-pillar, a trunklike deck that’s reminiscent of the 2002 Renault Mégane model, and an upright rear window.

The Mint looks way bigger than it appears. While there is still no official release about its dimensions, Genesis describes the concept as an A-segment car that’s similar to a Mini Coopers and the Fiat 500. It is featured with large wheels that are pushed a little bit out to the corners and extremely short overhangs. The model’s rear is wide and haunched, almost as if it’s a mid-engined sports car like the Porsche Boxster. You can find its battery pack under its floors with an alleged fast-charging capacity of 350-kW and a range of about 200 miles.

Cognac leather covers the Mint’s interior. Experts claim that the inside design is more forward-thinking than its exteriors. The two bench seat located across each other can seat three with the whole instrument panel being powered and angling towards the door near the driver’s seat when it opens for better egress and ingress.

The car’s instrumentation is minimized. It’ll have a small screen placed in the middle of its steering wheel with three round touchscreen buttons on each side of the wheel. Lee says that they wanted it to be conveniently at a fingertip’s reach.

Lee adds that the car is designed to have a minimalist theme for maximum relaxation. While screens can be helpful, placing one in every corner might be redundant. “It’s good to be connected, but you’re already connected all day in your office,” Lee continues. 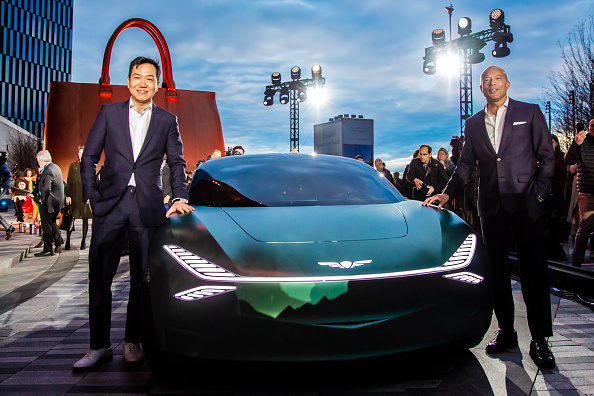 A feature that’s sure to be included in all Genesis products in the future is a spherical control placed in the center armrest. When users turn their car on, it’ll rotate and turn into the central control of all its driving modes. Lee says that it serves as a signal that an electric vehicle is turned on. The sphere shape design also inspired the rings that control the windows located at the interior door handles. Another central element design for the brand is its diamond-shaped pattern they refer to as the G-Matrix. The pattern is found on its lower body, wheels, pedals, interior floors, and scattered across its structural parts. A features

The large cargo area can be found behind the bench seat. Owners can load their luggage in and out through its reverse-opening scissor doors rather than accessing it through the usual trunk or rear hatch. It might seem too ridiculous, but Lee and his team claim that it’s something that they expect to reach production.

Lee noted that all the concept released by Genesis have always had production intent. It means that their ideas will always have features and designs that are used and expected on real cars. The company doesn’t do the “flying carpet” concept that everyone seems to be doing.

Mint isn’t the only concept that Lee wants Genesis to start producing; he always looks forward to Essentia which was another concept they presented last year. While most experts think that the Mint model doesn’t have a market, Genesis believes that there will be.

Behind The Wheel: How the First Cars Came to Be
150 years ago no one has even heard of cars, today, we can't live without them. So, how did the first car come to be?

Is ‘New Car Smell’ Bad for Your Health?
Sorry to burst your bubble, but the "new car scent" may pose a health risk.