Surprising Beach Destinations – The Best Beaches in the UK

When you think of white sandy beaches and turquoise waters, you may picture the Caribbean, Spain, Greece, Australia, even Florida…but the U.K. is probably the last place that would come to mind. Why not go off the beaten path and visit one of the several beautiful beaches located in the U.K.? We’ve listed our top ten to make your decision a tad bit easier. Bon Voyage!

This beach is no ordinary one. This extensive sand beach lies beyond a dune system that is over 6,000 years old with a grid of pathways and boardwalks. These unique sand dunes stretch about four miles, sitting across the top of Dundrum Bay. From there, you can see the picturesque Mourne Mountains nearby. Here, you have a lot of space to sit and relax on the marram grass, especially in the summer when you can see butterflies and moths of over 620 species. You can also spend time looking for lizards if you want. Other animals you can find over there are common and grey seals.

Bembridge is an extensive village with three beaches that are unique from each other. A single-track road leads to the beautiful beach of Forelands that stretches to Bembridge Ledge, which is a pebble ridge that can be seen at low tide. Boats may not appreciate it, but it’s a perfect place to fish using shrimping nets. Grab some crab sandwiches at the Beach Hut Beachside Bar & Seafood Kitchen. Or, if you are up for a seafood feast, make your way to the Crab & Lobster Inn delight in some local lobsters. 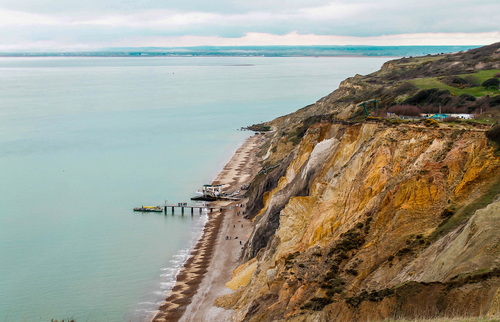 Overlooking miles upon miles of golden sand and open sea are a heap of whitewashed cottages. Runswick Bay, which used to be a fishing village with plentiful herring, lies between Whitby and Staithes. It is now a frequently-visited location, where you can plunge into tide pools, stroll along the Cleveland Way, and perhaps hunt some fossils. Most homes in the area have been converted into lodging houses, which are situated in an elevated area, looking like they are sitting on top of another. No streets over there, but romantic and dramatic pathways and walkways that connect these holiday homes. If you crave some homemade cakes (best paired with coffee), visit the Royal Hotel. In the same place, you’ll also find a simple, but scrumptious menu and a local Black Sheep bitter drawn from the tap. 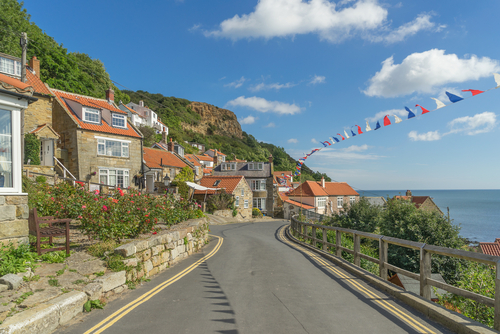 At Formby beach, with miles of dunes and woodland bordering the beach hop, you can expect a huge crowd on sunny days. Many of these daytrippers would want to witness red squirrels in the nearby pine woodlands or just lie down and relax on the beach. You can fly a kite or let your dog run along at an open space with flat sand at a distance. The beach is bordered with the lavish woodland and a vast stretch of sand dunes with rich wildlife including natterjack toads. 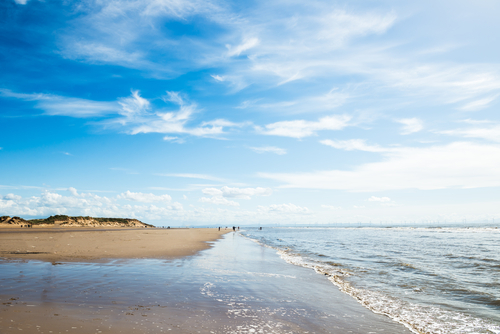 If you want to see grey seals, catch a ferry to Blakeney Point or go to Morston Quay and ask any of the local ferry companies there to arrange you a seal-spotting trip. Grey seal pups can be seen during the warmer months lying around the sandbanks of Blakeney Point. They are usually born during winter months. Start exploring at the end of the beach to see the one-of-a-kind ecosystem in the area. There you can see a handful of sandwich terns, otters, and yellow horned poppies. You can also go trekking along the sand and pebbles and do the “walk off the point” trek. 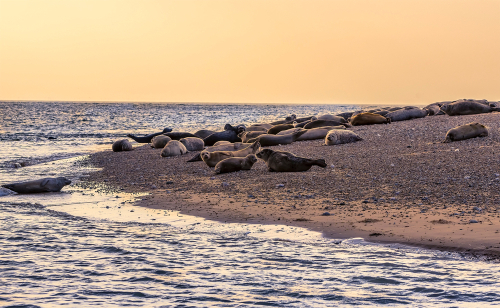 Getting there is quite an adventure itself, but it’s all worthwhile. The beach is near North Berwick and is accessible through a private road with a coin-controlled barricade. The extensive sandy beach with rocky ridges is a magnificent sight with the picturesque Tantallon Castle on one side, and a view of the Bass Rock, a volcanic piece of land packed with gannets. You can always bring along your four-legged pal, as dogs are welcomed all year round. There you can see also the smallest harbor in Scotland, which is carved from the rock by a local landowner. 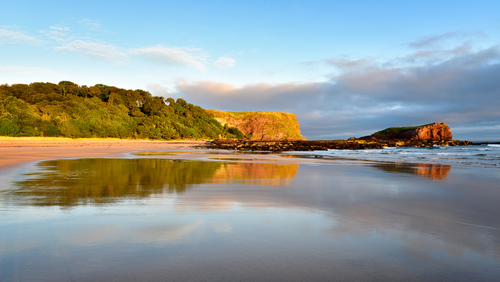 Go to the westernmost town of mainland Britain, St. Just, and half a mile from the place at the end of the valley is quiet and nostalgic Porth Nanven. You can park near the beach, but the place is best experienced by walking along the stream down Cot Valley. There you will see some otters, toad, and some Cornish choughs. You’ll also find ruins of industrial structures of tin mining in the area that have been operating there years ago. Yes, this place was once a thriving tin processing site, but now it’s all peaceful and quiet. The beach lies on a sheltered cove, which is popular for its “dinosaur’s eggs” (large ovoid boulders), but you can also see sand when it’s low tide. 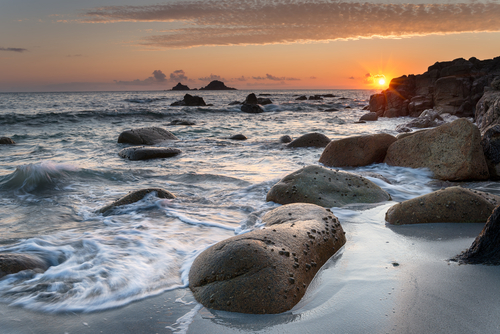 While you stroll along the Anglesey Coastal Path, it is a great idea to take a break and chill out at this pebble beach in Penmon Point. This place can give you a beautiful sight of the Blyton-esque Puffin Island, Snowdon and the Great Orme. From a distance, you can hear the sound of Trywn Du lighthouse, cracking the silence. You can enjoy the moment with a Welsh cream tea served at the Pilot House Café on trestle tables outdoors. Walk inland, and you will find Wales’ oldest Christian building, St. Seiriol’s monastery and well. More historical structures you can find there were built in 1600, which are two medieval crosses and a dovecote. 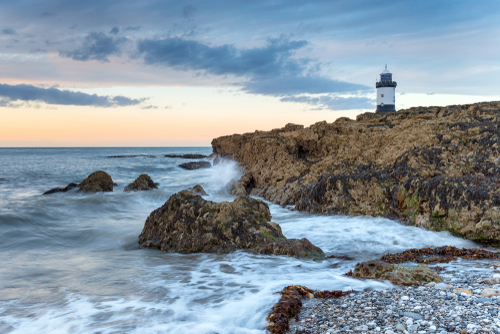 If you are looking for serenity, head to Kingsgate Bay, which is located between Margate and Broadstairs. Among the beaches on the coast of Thanet, Kingsgate is much quieter. Since no suitable car park is available, fewer people prefer the area. You can park at the nearby Joss Bay, which is packed with surfers, then take a short walk that leads you to this tucked-away paradise of glistening sand, sea caves, and chalk mounds. You can explore the fallen chunks of chalk and do a fossil hunt. You may dig up some fossilized sea urchins or other sea creatures. You can also swim and kayak along the bay. 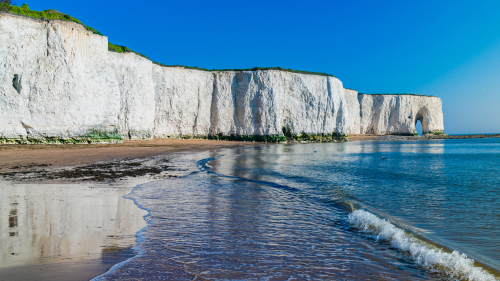 From the well-off shores of Sandbanks, get on a ferry to reach the Brownsea Island, which is a small isolated area of wilderness in Poole harbor. This destination is known for its abundance of red squirrel and as a place of adventure and escapade. Here, you’ll find Baden-Powell’s first Scout camp, woodlands, lagoons, and ponds. At the quayside, there is a visitor center and a café. But, if you want to have a quiet moment, the South shore is the best place to be. This less-visited area is the perfect place to feel calm and relaxed just squatting on the sandy banks and taking in the beautiful scenery of the harbor and the Purneck Hills, where you’ll also see locals catching oysters and some dunnocks flying around. 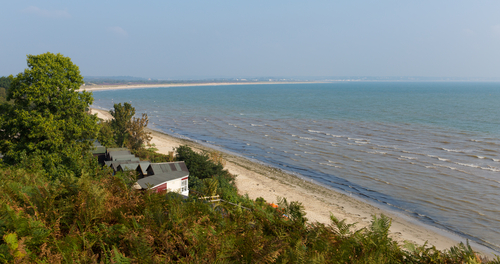 Watch Out For Japan’s Unique Manholes
With everything buzzing around us or over us, who would ever think to look down? Moreover, who would even bother looking down at an ugly old manhole?

San Francisco Airport Has A “Wag Brigade” Consisting Of 22 Dogs And 1 Pig
Traveling can be a stressful experience, even at the best of times. With flight delays and long lines at security checkpoints. But if you're passing through San Francisco..