Why Shouldn’t You Feed Birds Bread

Feeding birds with bread is a hobby that’s shared by many people across cultures. However, although birds are glad to gouge on your ordinary treats, there are plenty of reasons as to why this is not actually a good idea. 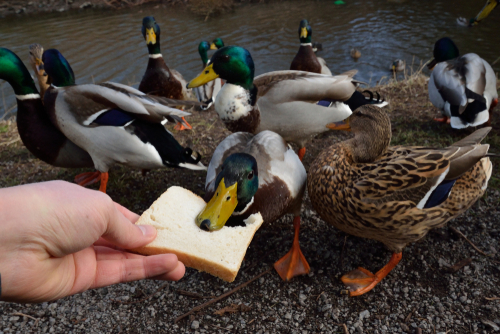 According to experts “Birdseed, frozen corn or peas (thaw first), oats, and other greens (torn up small so they can eat them) provide the best nutritional value to them. But please do not feed ducks bread. It provides no nutrition, so they end up being fat and essentially starving at the same time.”

Simply put, bread does not possess any significant nutritional value; a duck or goose might become satisfied in eating the crumbs, but it is no way giving them the nourishment necessary to become healthy birds. It’s kind of similar to merely living on croutons alone your whole life. There’s a chance that you will continue to exist, but you will certainly suffer from poor health because of inadequate nourishment. 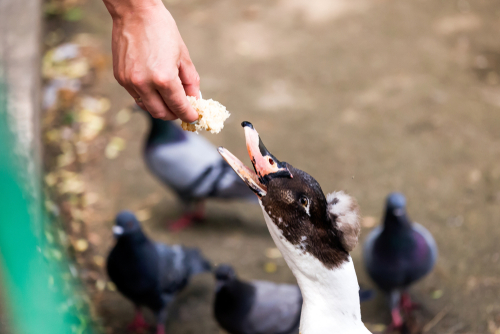 The truth is, bread is never and will continue to never be part of the natural diet of birds, and the Canadian Wildlife Federation, caution people from feeding the birds as it also weakens their hunting instincts. Ducks natural diet typically consists of nutrient-rich foods like insect larvae and other aquatic invertebrates, small fish, amphibians, as well as seeds and aquatic plants. Bread and similar products such as chips, doughnuts, and crackers provide them very nutritional value. This can also cause the birds to become very aggressive towards one another, and may lose their foraging instincts as they lose their natural fear of people.

Regardless of the concerns in nutrition are marginal (they are actually not), the general effect it has over the animals is not good.

Discarded bread is likewise detrimental to them

In the event that a bird resides in a pond or lake where it is fed with bread on a regular basis, other problems may come to light. Bread that isn’t gobbled down by the birds simply doesn’t just disappear into thin air. There are no janitors to pick them up. They stay in the pond or lake – the CWF likewise remarks that it can cause a build-up of algae in the aquatic habitat. ABC Radio Perth revealed an even terrifying scenario wherein the increased nutrient content present in the water produced a bacteria in the ground that became responsible for spreading avian botulism:

“So when the birds eat snails and worms that are in the mud, they become infected with the bacteria, when releases a toxin that causes them to become paralyzed, and eventually they die.” Thus, as it turns out, you are not only disrupting the natural diet of the birds – you are disrupting their entire ecosystem and the other living organisms large and tiny who reside in the waters as well. 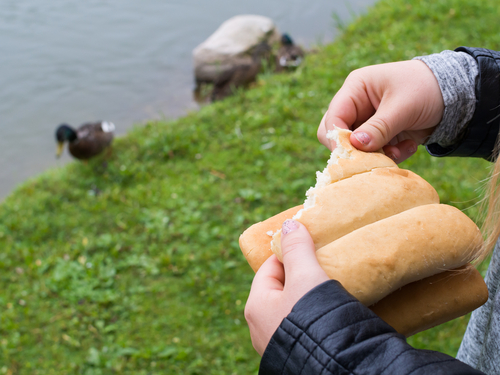 Birds are not in fact adapted to eat food in a screeching crowd at your feet. As Mother Nature Network reveals, the fierce competition on bread crumbs is actually taxing for the animals. The flock of competing birds likewise produces far greater quantities of droppings! This adds to the number of environment problems mentioned earlier and enhances the possibility of spreading disease as well. And in terms of training their young to forage naturally, the birds could become too obsessed with bread to appropriately complete such a vital task, stopping the next line of birds to forage as nature designed them to.

There exists a disorder in birds, mainly in ducks and geese, known as Angel Wing, which leads a bird to develop a deformed wing. There is plenty of debate regarding the truth behind feeding junk food and bread as the main reason for the onset of such a disorder, as there is no significant study regarding the matter as of yet. Nevertheless, the birds that are more prone to exhibiting the disorder are typically near the premises of humans, as One Green Planet reports, in areas where people feed them with bread since they were little ducklings. They are most often birds with serious lack of nutrition.

Is it really worth disrupting a bird’s natural ability to fly simply to because you find some kind of pleasure or fulfillment in feeding them with crumbs? 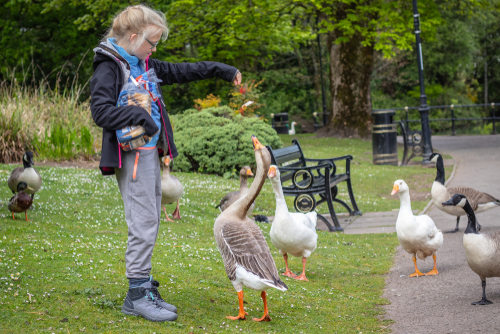 What you should feed them instead

There are waterfowls that are already wired to anticipate food from people – they may even postpone migrating south to escape the coming winter, even though they should. Or perhaps you simply believe that the habit of feeding wild animals is something that you just can’t avoid completely, even though nearly every wildlife foundation says you should.

If such is the case, you have the option to feed the animals with food that are purchased from a real pet store, such as duck pellets. In addition to that, you likewise have the option to offer them whole corn kernels or oats, in the event that you intend to make them fat, or refrigerated carrots and peas. In case you have excess leafy vegetables, such as lettuce, they will work great for the birds so long as they are minced into appropriate bite sizes. But we implore you, take into account the situation of the birds first. You might have this notion that you are the only person thoughtfully feeding the poor waterfowls but in reality, there is a long queue waiting in your back.

Understating Color-The Color Wheel Theory
The color wheel is one of the fundamental tools utilized in studying the color theory and it aids students to grasp the link between individual colors.

Temperatures in U.S. National Parks is Higher Than Other Parts of The Country
At the Eagle’s Peak, the most elevated peak in Yellowstone National Park, you will be towering over the rest of the surroundings at a height of 11,372 feet (3.466..